It was December 2012 and I made a commitment…

To run my first ever half-marathon. 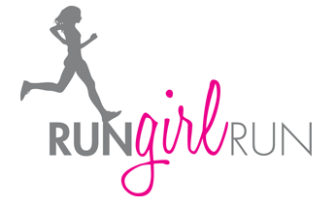 What was I thinking?!  I was the girl who had run a total of FOUR 5K’s at the time I decided to set this ridiculous goal.

One of the above mentioned 5K’s was with my Grandpa, who has been running for years!

Before we get into this half-marathon business, let me first recap that educational 5K day.

I believe it was back in spring of 2002.  Grandpa had asked if I was interested in running a race with him, and since I had never run more than a mile (at that point in my life) I decided it would be a good challenge and a perfect opportunity to spend time with Ol’ Gr’pa G.

And-so began “training”.   I thought I was doing great with a few jogs here and there, maybe a mile, maybe less, skip a few days, walk/jog.  You know….

I mean, I was still in college for goodness sakes.  Who exercised for FUN then?  I thought it was just about drinking beer and squeaking by decent grades during that stage of life!?

Fast forward to day of race.

I started out strong, running alongside Grandpa.  Then the 1/2 mile marker hit and I was D.Y.I.N.G.

I told Grandpa to just keep going.  About a mile and half into the race was our turn-around point.

You know what happened?

Do I dare mention it was BEFORE I even hit said turn-around point?

Let us move along to about mile 2.2ish.   I am thinking I want to just quit.  I am clearly in last place by now.  I am looking down at the ground when I start hearing my name, so I look up and see this figure running towards me.

Ya, it’s him.  He had already finished and decided to run back and help me finish ‘strong’.

Grandpa, seriously.   Did you REALLY just do that?  I mean, COME ON!  Pretend you don’t know me or something at this point.  Don’t bring attention to the fact that I am your granddaughter who is clearly way outta shape and really only wants a beer in the worst possible way right now.

Insert about 6 years of NO running after that.

I had run a few fun 5K’s that previous summer leading up to my decision to run a Half.  Think Color Run style.  A lot of fun and no heavy competition.

I wanted to set a major goal for myself that was rewarding both internally and externally.

You see, my grandpa means the world to me.  All my family does, of course, but this is something I wanted to do for him.  For me too, of course, but mostly him.  He has supported me in ways that I can’t ever thank him enough or pay him back for.  Doing something like this was my way of showing him how much I admire and look up to him.

And so it began.

I looked up multiple plans online for running a half-marathon.  I took several of these suggested training outlines, mashed them together and made one that fit my liking.

I also didn’t tell anyone.  I think it was around week 3 of training before I even told my own husband.  Maybe week 4 that I told my mom and a few friends.  Gradually, most all my friends and family found out in one way or another.

Of course, I had set-backs along the way and didn’t follow the training plan to a ‘T’.  But, I stuck with it until about three weeks before the actual race when I was sidelined with an injury.  I had been plagued with pain in my lower back and hips that often woke me up at night from the excruciating pain.  I went to see a few specialists, and basically was told to take it easy and fore-go running until the pain was gone.  I tried to run the week before the race, but the furthest I could get was maybe 2-3 miles, so I gave up all forms of exercising those last few days.

I was incredibly down and out and feeling sorry for myself.  At this point I even shed a few tears.  Dangit, I had set a goal, stuck with it, told multiple people and was feeling so good about myself.  Now, I was pissed.

During those last few days I received flowers, candy, cakes… the works.

All over a silly half-marathon.   I have some of the coolest friends. 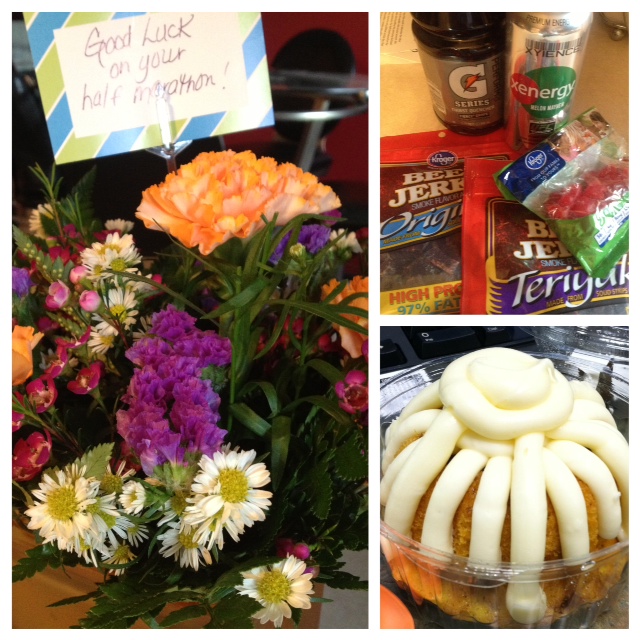 And now; it’s the day of the Half.

I am GOING to do this.

I HAD to do this.

It was FREEZING that day.  Finger numbing freezing.  And drizzly.

Ear buds in, Playlist cranked, GPS on and off I went!   The first two miles I remember being incredibly difficult.  My shins were so tight from the cold and I was so worried about my hip.  After two miles, I started warming up, I started actually listening to the music and I remember looking up at the sun and feeling this overwhelming feeling of accomplishment already.  I WAS going to do this.

I hit mile 5 and I was feeling GREAT.  I had been going a comfortable and steady 10.15 minute per mile pace up to that point so I decided to kick it up a notch.  It was at that very moment that I saw one of my colleagues (who is an avid marathoner) standing on the sidelines cheering people on.  She totally made my day.

My pace kicked up a little more.

Coming up on mile 6.5 and I could see my family.  My mom, Clint, my friends….  and then my tears.   I was half way there, I was feeling great and here they all are cheering me on.   The emotions took over for a little bit, and I welcomed the feeling.  It was all this emotion that was carrying me through.  What an incredible feeling. 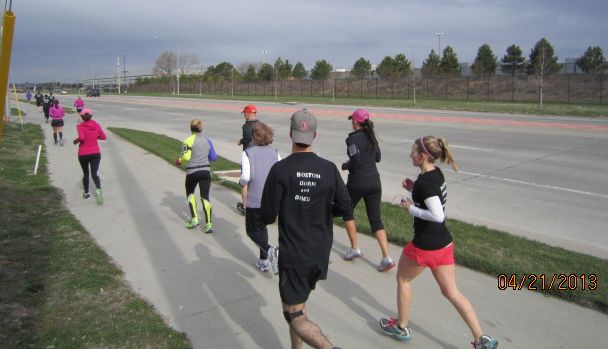 Mile 7,8 and 9 were a blur.  I remember around mile 9 debating on whether or not to pass a few people.  Internally, I wanted to pass them.  Externally, I didn’t want them re-passing me later.

I committed and passed them.

Mile 10 and I see my crazy friends and family again.

I was HURTING.  My shins were tight, my lungs burning and my calves felt like they were going to snap.   Mile 11.5 and I felt like I was the only one out there.

Mile 12.  Almost there.  My pace was faltering heavily and I found myself giving pep talks every few steps.

I see mile marker 13 and I start to tear up again.  I tell myself that once I hit the mile marker I was going to sprint to the end.

And sprint I did.

This is me seconds after crossing the finish line.  I couldn’t catch my breath and I was sobbing. 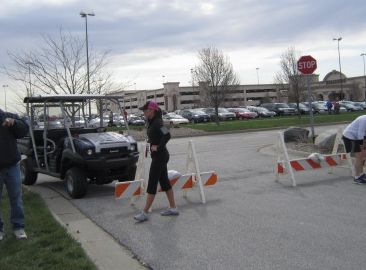 Husband to the rescue. 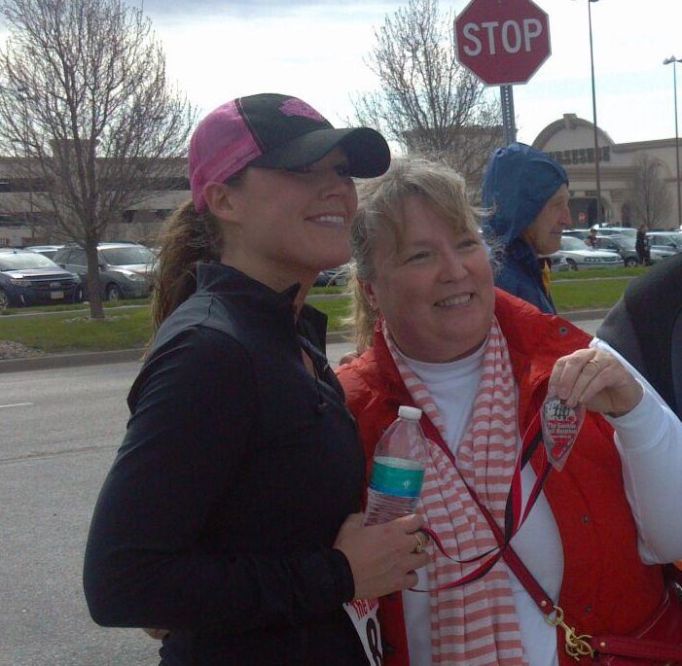 And my Grandpa and Grandma.  The guy who beat me in a 5K all those years ago.  The Man of the Hour (or 2 hours)

I think I made him proud. 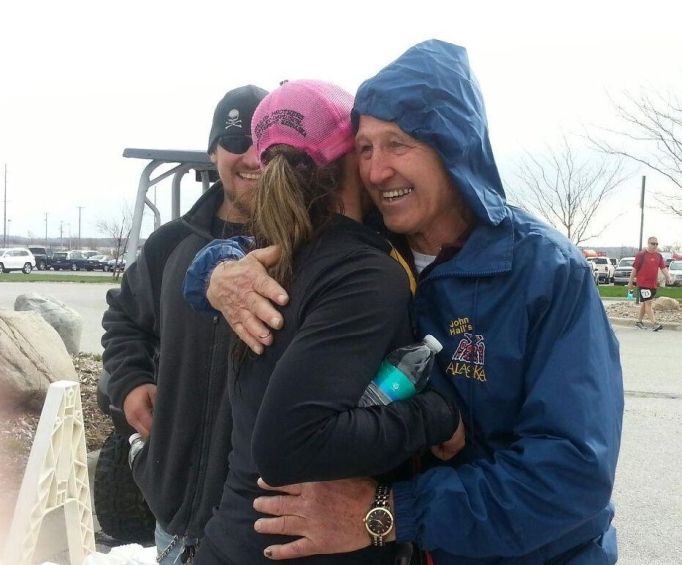 What an emotional journey.  One I am so thankful to have experienced.

Coming up to that day I had no idea if I was going to be able to participate or not.  My biggest fear was failing.  I didn’t want to fail.  So many races I had signed up for and backed out of.  I wanted this one to be different.

This one was different.