Remember when I posted about running the Iowa Market to Market not all that long ago?

Well, it happened again!  The Nebraska Market to Market Relay was this past weekend and it proved to be an absolute blast.   This time my team consisted of several YMCA girls, and so of course, we had to incorporate that little fact into our team name. 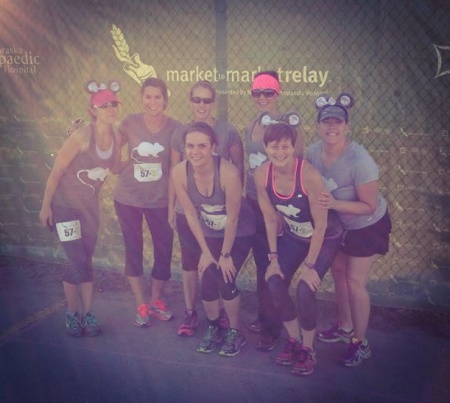 Our day started bright and early with us all meeting in Aksarben Village at 4:50am.   That hour doesn’t bother me during the week, but I’ll be honest and say it’s a little brutal for a Saturday morning.   All was well though – we were in for an incredibly fun filled day!

We had set our splits up previously so we were organized and mentally prepared.

Well, actually….  That was probably more for me.  They are all avid runners.   I’ve put in maybe 12 miles total since the Corporate Cup.  Sounds like me, eh?

Runner 1 took off at 5:20AM in the freezing cold weather and dark.  We had frost on the ground Saturday, it was THAT cold. 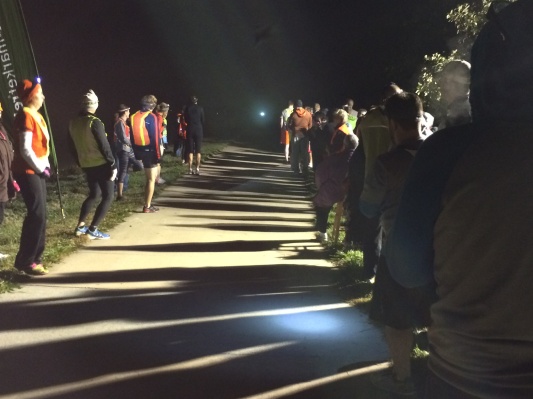 On top of the bitter cold and early hour, it was also foggy.   See that little light at the end of the human tunnel?  That’s a runner coming in from the first 3 miles. 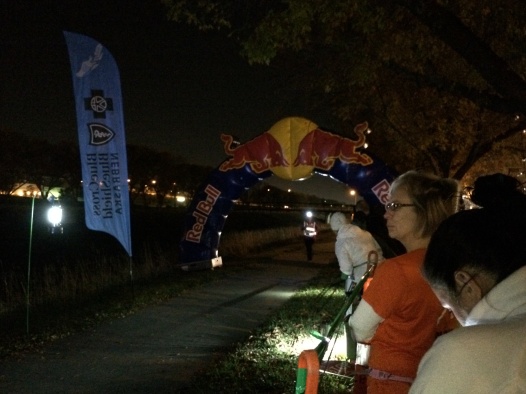 Dawn finished her first leg strong and handed off the baton to Sally, our runner 2.   Somehow I completely missed the hand-off.  Apparently I was too busy jumping around to warmup!  Or… I could have been listening into the hilarious conversation happening between a team of kilt wearing men.  I am prettttttyyyyy sure they’d been hitting up the booze already.  😉

I redeemed myself with Sally and Amy’s pass-off ending Stage 2 and starting Stage 3! 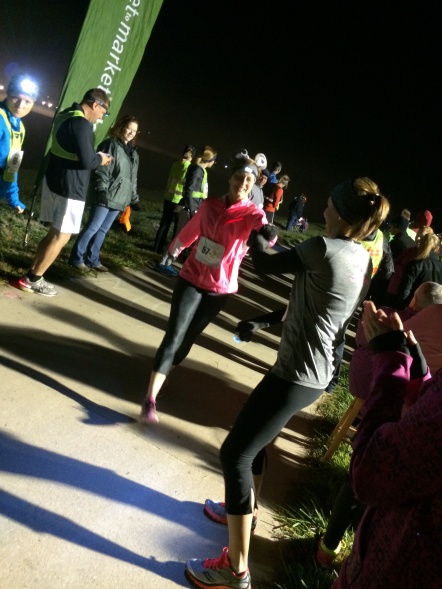 Amy, runner 3, was still early enough that she needed her head lamp.   That sun was sure taking forever to come out and play!  Stage 3 had us camped out for a little bit since our runner was putting in 5 miles at this point.  It was a good opportunity for us to get a few photos in.

Sally is one of the first gals I met at the YMCA.   She and her husband, Dan, are honestly the NICEST couple I have ever met.   Sally attends my Insanity classes now and I love to pick on her a little in class.  What she doesn’t know is she pushes ME harder.  You should see the arms on this woman.   Power house I am telling you! 🙂

Back to M2M: Amy soon came running into our exchange point and off I went.  The sun was just starting to come up so I had an absolutely gorgeous run!   And yes, I am the girl who takes impressively blurry photos while out on the trails. 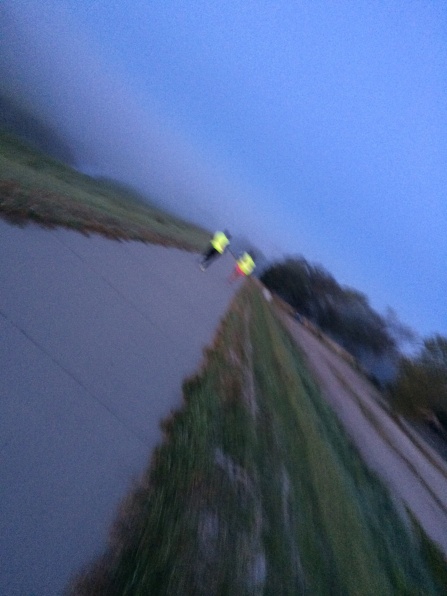 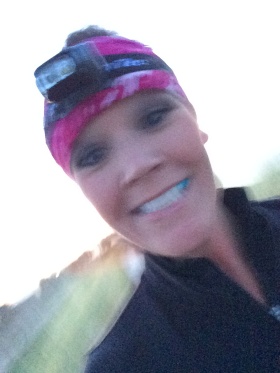 Oh and I ALSO text while running.  I let them know when I had only .5 mile left.  Don’t text and drive, friends, but you can text and run! 🙂

Stage 4 was soon over and I found myself passing the baton to Jodi for her to start Stage 5, which ended up to be 4.8 miles of very hard hills.

Jodi was a TROOPER!

Our next exchange happened on a gravel road in the middle of nowhere.   Alice had a gigantic hill to climb prior to her hand-off to Kristen and she completely rocked it!

And just like that, we were back to Runner 1 again with Stage 8!

Stage 8 was a short 2.7 mile run and our directions told us that the runner had potential to beat the support vehicles to the next exchange, so we booked it and made it just in time for the hand-off.

And again, we had another short run so we had to boot-scoot to the next exchange.  No messing around on these two runs, that’s for sure! 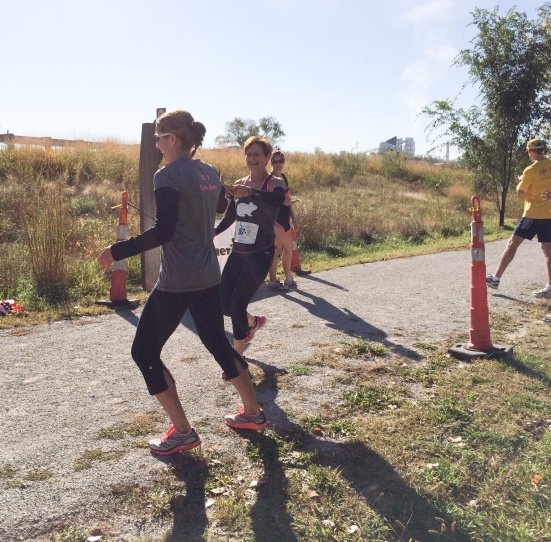 A quick, clean hand-off and we were on to Stage 10!  Amy was a rockstar by taking the longest legs.  Stage 10 was another 5+ miler.   She had a nice little break thanks to a train rolling through prior to her last mile.   Not sure if that was welcomed or not by any of the runners!

Don’t I look pleasant as a peach waiting?  HA!   I need to work on my non-verbals.  Goodness, JP!

Stage 11 was a hilly nightmare.   Rolling hills, gradual incline, all gravel.   Whew!   My quads were on FIRE!   I mean, just look at these hills.  They don’t stop!

Stage 12 and 13 hand-off took us to a little tiny town.  How CUTE is Alice cheering on Jodi as she was making her way into the exchange point?

And she’s even cuter when she gets done running!   I mean, who does that?  😉

Moving on to Stage 14 is where I ran into an old colleague and friend, Julie!    I have run into her on several occasions the last several months and we keep commenting that we need to schedule an actual run-in where we can sit and have a cocktail!   I love running into people I know – and it happens OFTEN at races.

Stage 14 ended runner 7 and we were back to runner 1 on Stage 15!   Seriously – the day FLIES by when running a relay. 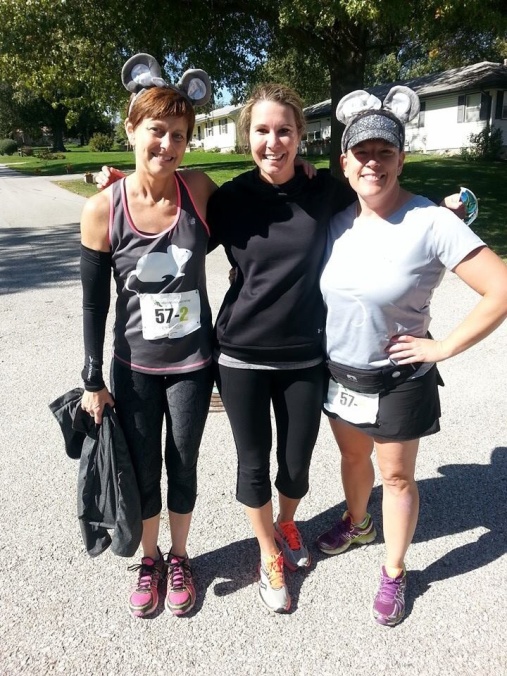 Stage 15 and 16 hand-off was on another gravel road in the middle of no-where and the exchange point was heavily congested, so I missed a photo opportunity, however, I DID run into a friend and current co-worker Sammi!   YAY!

Stage 16 to 17 hand-off happened shortly after!  Couldn’t believe we were on the bottom end of our down-hill slide! 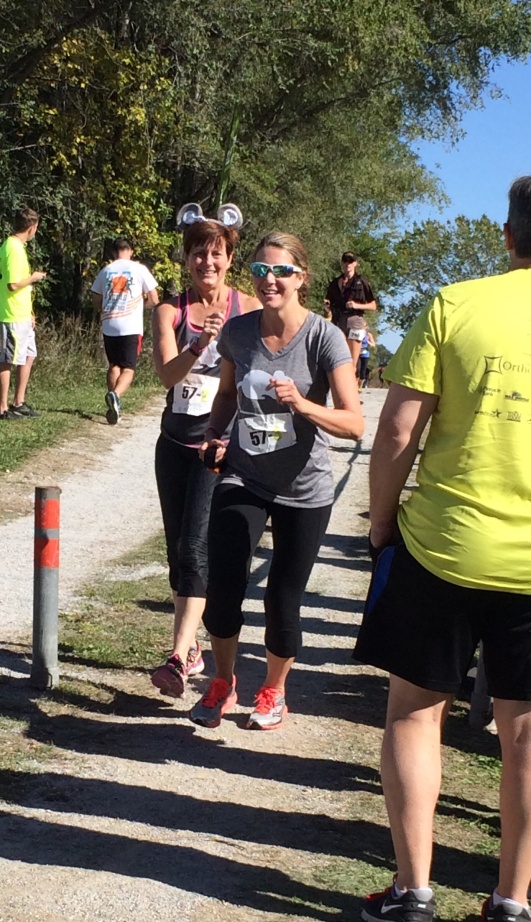 Next up?  Back to me to finish out Stage 18!   This part of my run was gorgeous, but man were my quads talking!   I got passed by a couple men and one girl who was super nice and yelled out “NICE WORK”.  Thanks, girl!  Gave me the motivation to keep pushing.   I managed to pass 4 folks on this leg of the journey.  NOT that this was a race – but at this part of the day, accomplishing anything other than putting one foot in front of the other is something to celebrate.

Soon I was closing out my 3.8 miles (happily, might I add), Jodi completed Stage 19 and Alice took off on Stage 20!

Stage 20 and 21 hand-off happened out in the woods, so no photo opportunity there.

AND I guess the excitement of ENDING the race consumed me because I didn’t get a single shot of our Team closing out the race over the bridge into the Lincoln Hay Market Area.

Regardless, we had an absolute BLAST and several of us made sure to drink our free beer at the end.   Much deserved, I might say!  I even ran into some old friends and colleagues from my teaching days!   Beka and Colleen… why didn’t we take a photo?   SADNESS!!

What a great day, good weather, hilarious conversation and a feeling of accomplishment at the end of the night. 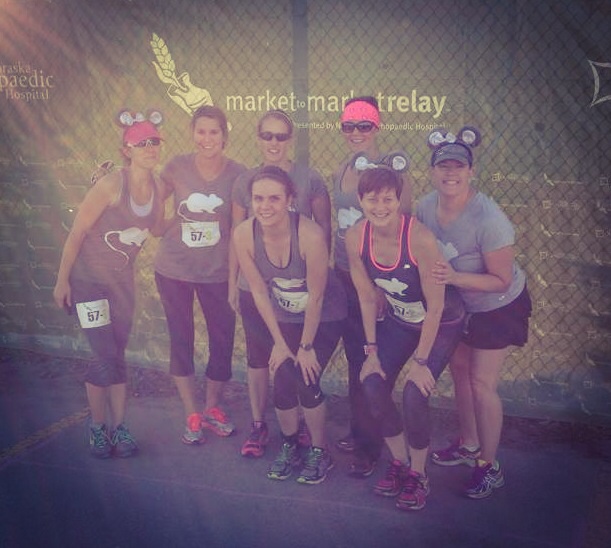 Finally hung up one of the wood art pieces. 🖤 Also, I have no plans on taking down my Christmas decorations anytime soon. We’re still in the spirit of whatever brings us joy over here. 🎄💫🖤😉