But, what’s the use of a hangover without the story of how it came to be?

First of all let me say Thank You to our veterans for your time served and to our current armed forces who continue to serve.

Now, to the bane of my Saturday?  Friday night.

We traveled north to Sioux City, IA to see the Turnpike Troubadors in concert with Jade, Kayla, Scott, Haley, Josey and Stephanie.  It was a ridiculously fun night.  Turnpike was INCREDIBLE to listen to… again, music geek in me can’t get enough of good music and TRUE musicianship that these guys exude.

We let loose, we drank a few too many beers, we stayed our ground in the front of the venue holding steady to the gate, we flirted with the band, we sang along loudly and we made every ounce of that hangover totally worth it. 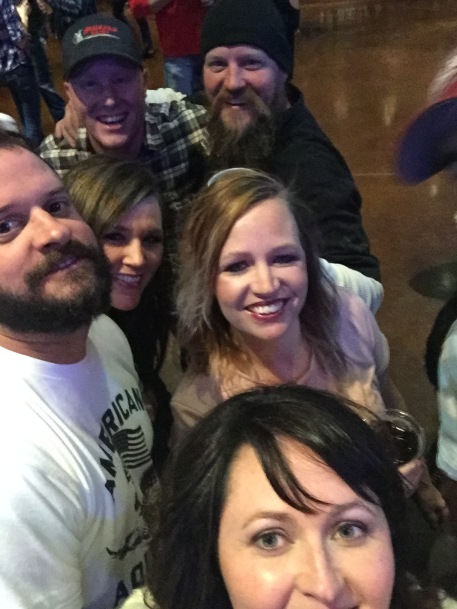 Is it me, or is Jade channeling Alan from the movie, The Hangover?

We even managed to hang out with both bands (opener and headliner) after the concert at a local tavern, to which I awkwardly attempted small talk about music (listen Jordan, don’t talk after 10 beers) and Kayla took endless photos with the groups.

Thank GOODNESS social media didn’t exist when we were all in High School.   It’s bad enough as adults.

Friday kinda rocked, and I am ready to do it again, minus the heavy amounts of beer. 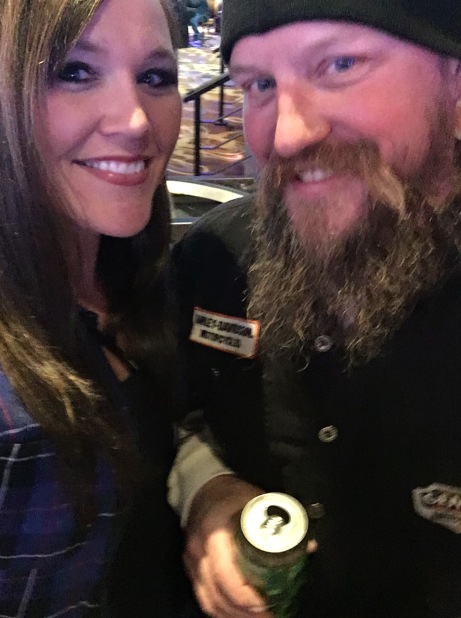 So then there is Saturday again.

Let’s all take a moment and rejoice in the fact that I got out of bed at 6:30am and was ready to run the Beer and Bagel 4 mile trail run at 9am. 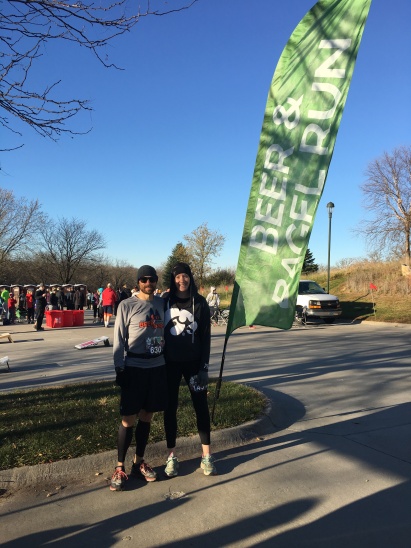 Blair is a trail running PRO!  She recently ran a 50K.   Yes, you read that right.  50K = 31.08 miles.  So, I laughed at her for wanting to still run this with me.   It’s 4 miles.  That’s like her warm-up nowadays.  But, thankfully, she did it and we had fun and I appreciate her grace in not rubbing in the fact that this is peanuts to her distance legs.

I might consider running the 13.1 trail run next year.  Trail running is SO much better than road running.  It is so much more forgiving on the joints since you are on soft ground and uneven terrain that forces you to take it easy and watch where you are going, rather then operate as a robot and pound the pavement.  Running the 13.1 Beer and Bagel run in 2017 is a definite thought.  A consideration.

After the race I napped again.  DUDE!  WHAT IS WRONG WITH ME?!    I think it was a culmination of three days in a row last week of getting up by 3:10am on top of the minimal water and shenanigans on Friday night.  My body was O.V.E.R. it.

I forced myself into partial civilization on Sunday afternoon when I bundled up and went out on the HD, just her and I.   It’s that time of the year when the hubs is gone hunting on the weekends and I get my coveted solo ride time in when the weather is cooperating.

I managed to burn through a full tank of gas and it was all sortsa magical.

Solo rides = no destination.  No planned stops.   Just a direction, the roll of the throttle and a big ass smile on my face.  🙂

Although, this snap looks like I don’t even have a head, let alone a face for a smile.

But my front wheel looks B.A.

Cheers to a GREAT weekend!