Continuing the August 29th weekend recap.  If you are just tuning in, the first part can be found here.

Saturday morning, Clint and I found ourselves headed to a Nebraska Football Game.

We are Hawk fans in this house.  Well, Clint’s a Hawk fan.  I am more of a Hawk supporter.  I don’t follow the athletic teams religiously and won’t pretend to be a die hard fan.  I am not.  But, I support the black and yellow.   I have to!  Iowa is my home.  My heart.

So, what on EARTH are we doing at a Husker game?

One of Clint’s clients who has season tickets with club seating made different seating plans for this particular game, so he offered them up to us.   Score!

I’ll admit, I was feeling a little squeamish from the previous nights activities, so we were a couple hours behind our original tailgating schedule.

We met up with our two friends Jade and Van who were able to get us tailgating wristbands.  We had a straight shot of the stadium from where we were, and fortunately for us, that giant miller light bottle helped us find our way through the sea of red. 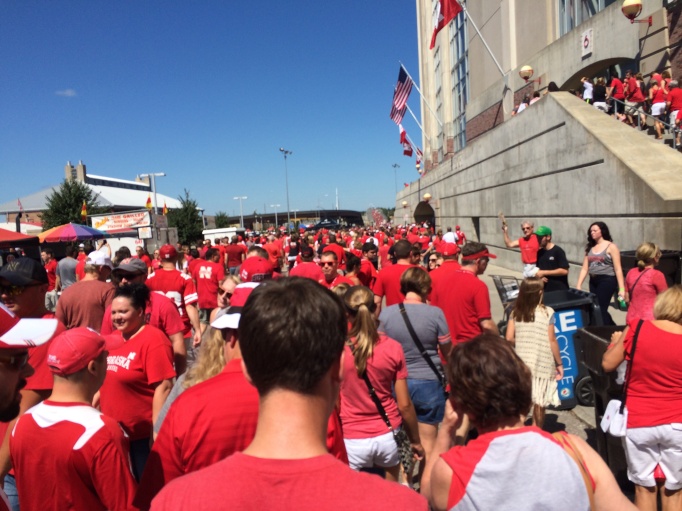 Let me tell ya… the energy was unreal.  The support for the Huskers was very evident.

As we made our way into the stadium, we were led to a never ending escalator that wound up at least 5 floors.   I wish I had taken a photo of this thing!  Our seats were actually just outside an air conditioned building complete with multiple concession stands, couches and lounging chairs.  What is this?!

An experience, that’s for sure!

I loved watching the pre-game show put on by the Husker Band.  Such massive numbers and powerful sounds.  They were superb!  The Cheerleaders and Dancers were fantastic as well!

Question though – are there not male cheerleaders in Husker land?  I was looking for some sweet collegiate stunting.   None.  Lame. 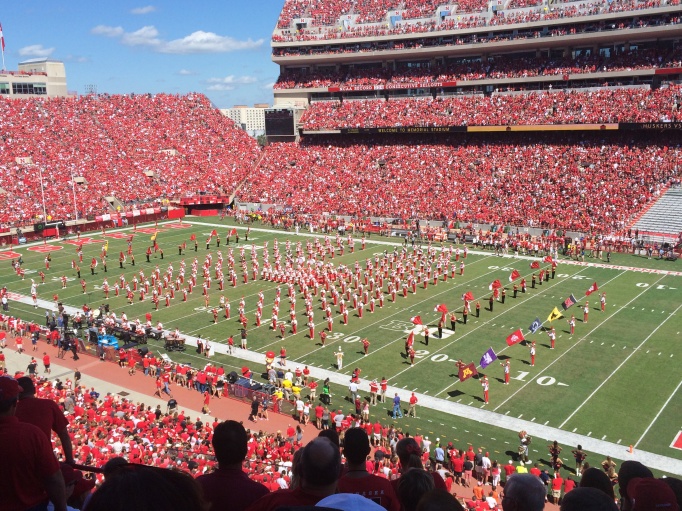 I also thought it was pretty cool that the band had each of the opponent team flags on display as well. 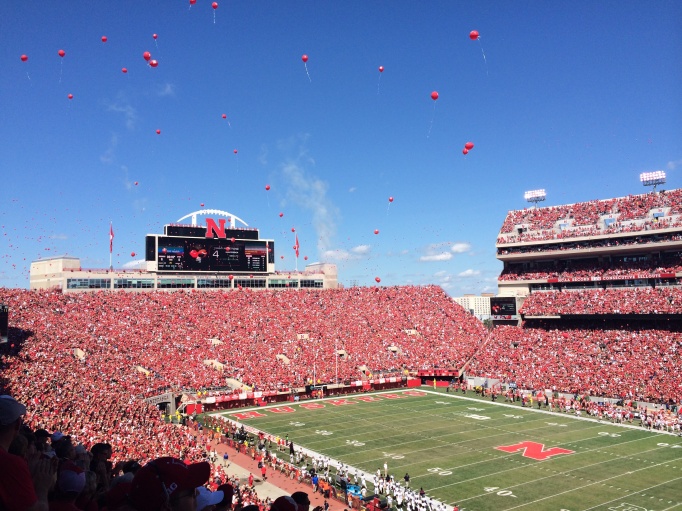 Balloon release after the first touchdown

Waiting for the halftime show to begin!

Clint and I took off for the Champion’s Club during the 3rd quarter to meet up with the client who so graciously gave us his tickets.

This place was PACKED for obvious reasons we call beer.

Unfortunately, we were unable to track down Clint’s client, so we bid farewell to the Husker world (not before we said hello to my old High School classmate who patrols the Husker games) and headed to a nearby bar to finish out the night over some beers with Jade and Van.

All in all – the game was a GREAT experience and I am so glad we went.  It was entertaining, the beer was cold, people were in good spirits and the weather was perfect for a game of football.

Rain.    Man, it’s been raining like MAD in Nebraska lately.   Two of my morning jogs last week got axed thanks to the AM downpours.  It came as no surprise that Sunday’s forecast was intermittent rain with some pretty serious storms later in the evening.

Just a little bit of a late start is all… and an attempt at a family selfie while we waited for Round 1 of the storms to roll through. 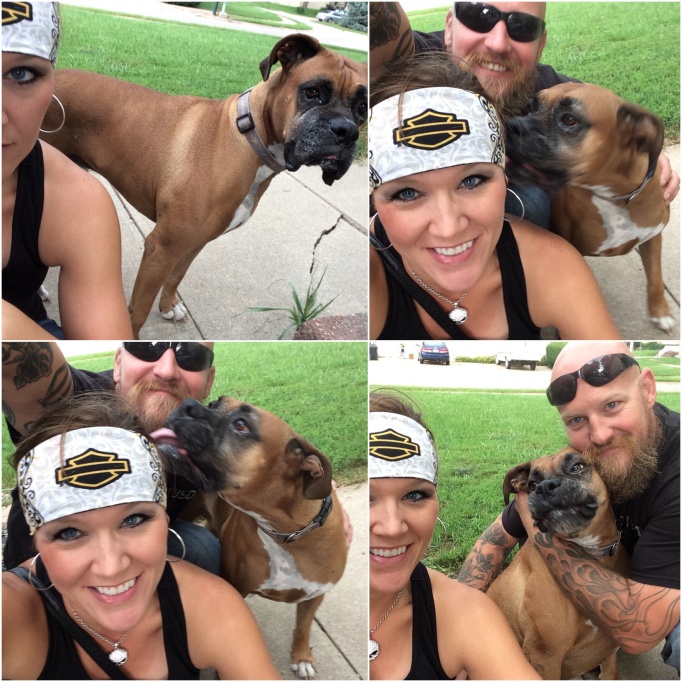 Champ didn’t quite get it, so Clint just resorted to squeezing his face.

Once the rain went through the city, we hopped on the bikes and started our trek North.  First stop: Missouri Valley where we ran into a few people we knew from the Red Oak, IA area, who were also out riding.  It was nice to catch up with them a bit.

After a few beverages we headed back out with the destination of Soldier, IA.  Each Labor Day, Soldier does a big weekend celebration complete with bands, vendors, lots of beer and good BBQ.   We rolled into Soldier around 4, had a bite to eat, browsed the vendor tents and then took off east to Dunlap, IA to meet up with a few peeps we knew on the poker run.

Did you know that breathalyzers existed in bars?

Liz tried it out.  I am not so certain it holds much credibility, so you might be best to have a DD.  I don’t think the cops would go for the excuse

“But occifer.. the bar breathing thingy told me I was ssssooobber.”

Soon after arriving in Dunlap we decided to take off to Moorhead, IA.  And THAT is when the big storms decided to roll in.

Torrential down pour, cold wind and then HAIL.   If you ride, you know that rain alone hurts like a motha.  Add in hail?  FORGET about it.   We pulled over in a random farmhouse driveway and waited out the heavy rain.

Fun Fact: Several of us have bruises from the hail.  Mine are minimal.  I have one on my leg and a tiny one on my wrist.  Liz’s husband on the other hand got a sweet shiner from it!

Once the rain passed we made our way to Moorhead.  Unfortunately, we came up on a motorcycle accident, however the gal is going to be just fine.  A gash on the head and some worked up nerves.   We had a nurse and a first responder in our crew, so they tended to her until the ambulance arrived.

Wet roads and back brakes don’t go together.  Keep that in mind, folks.

After the emergency crew arrived we made our way downtown to the local bar when another round of rain came in. 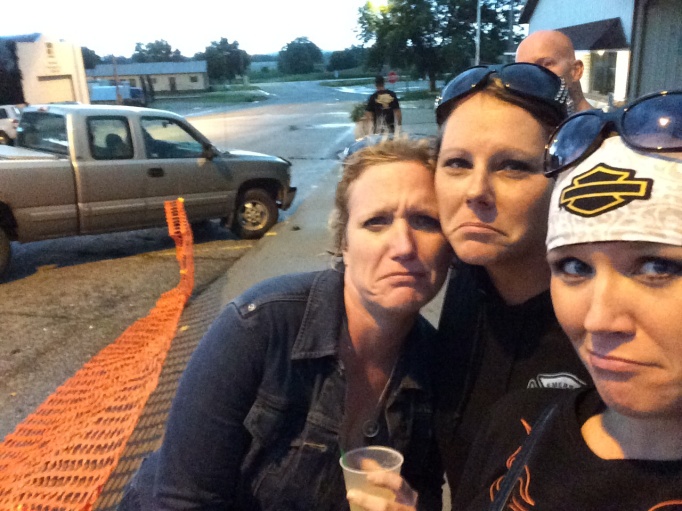 This rain chose to stay.  For HOURS.

I can think of worse places to be stuck at, so we made the most of it, had a lot of laughs and enjoyed each others company. 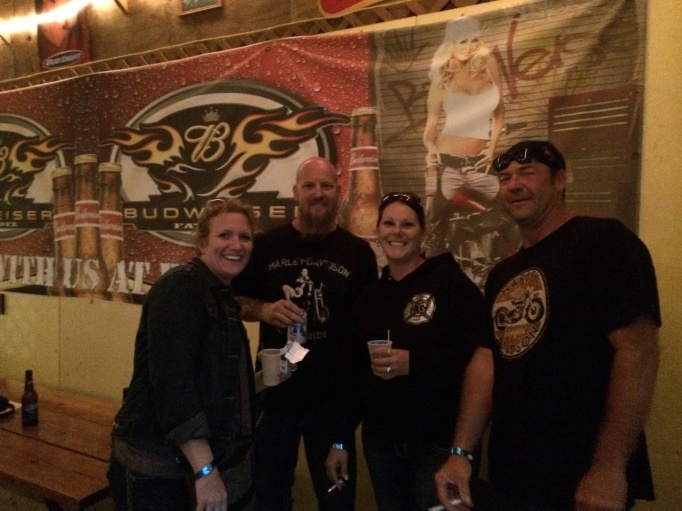 Finally, 10:30 rolled around and we were able to move on.   The crew went to Soldier where they were camping (in a camper thankfully.  I hear most tents were indoor swimming pools at that point) while Clint and I headed for Omaha.

The ride home was a whole other adventure.   Let’s just say Clint and I made a few wrong turns and detours getting home.

Like… road closed, bridge out, detour through a park, another detour on gravel roads (I won’t tell you who had THAT brainiac idea… ahem… husband), gravel roads that landed us back where we started, and then back to a main highway and then finally to the interstate.

It took us a little bit, needless to say.   But, safe and sound we arrived home shortly after 12:30am.

And THAT wraps up the weekend activities and moves us right in to a four day work week!  By the time you read this I will be out on business in central Iowa for three days.   Traveling season has officially begun. 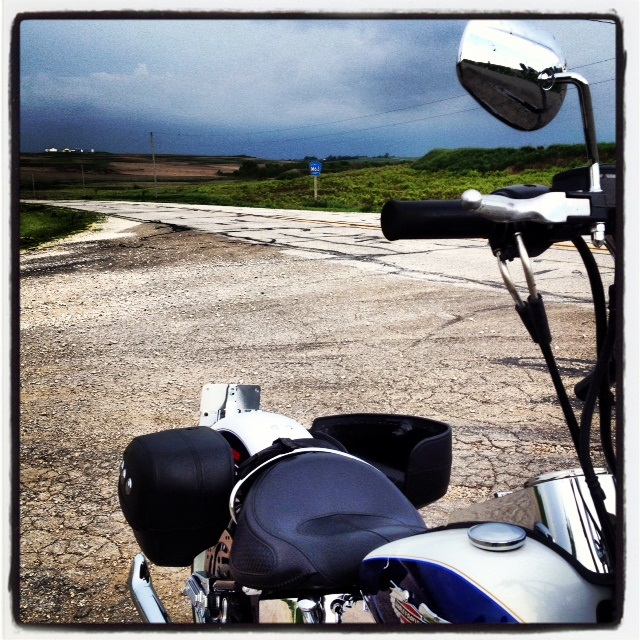